Critical thinking, problem solving, collaboration and student engagement are all benefits that come with introducing students to Breakout Education.  With Breakout Edu students work in groups to solve riddles and/or problems to get answers to unlock the "box" which leads to another locked box or code until they finally get to the last box. Breakout Edu can be completed with actual locks and boxes or digitally. This year I was fortunate enough to try both kinds with the fourth and fifth graders at my school. The results were amazing.

My first experience was with 5th graders using a game that I created called "Breakout of Elementary Media" in honor of their last media class in elementary school. The students were engaged and focused like never before as they set forth to solve the first clue. The clues can be as simple or as complex as they need to be. For this game the students had to use riddles around the room and on a website to give them the answers to a survey which led them to the first locked box. Inside that first box was a decipher to get them to the next clue. This format continued until they reached the final box. Not only does Breakout Edu teach the aforementioned skills it also teaches perseverance and determination.  Frustration sometimes happens within a team as they stumble or fail at the clue, however it was great to see the teams work through it and solve the problems. The students were sprinting across the media center trying to find answers to the clues or riddles. As they unlocked the final box they were rewarded with a sweet treat of M&Ms and a bookmark to use for summer reading. The students left that day telling everyone that they "broke out" of the media center. They were greeted with puzzled faces since no one else at my school knows about Breakout Education. This problem will be resolved next year as I train the teachers on the benefits of Breakout Education. 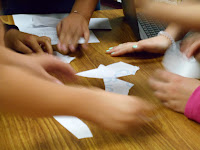 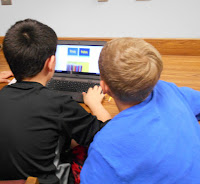 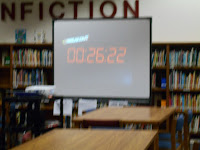 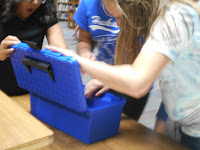 The last experience of this year was with fourth graders using a digital breakout called, "Saving North Carolina." I was excited that the fourth grade teachers were willing to collaborate with me on this.  The students had the task of saving North Carolina from a Zombie attack. The digital Breakout was much more in depth where they had to really work together to decipher the messages and the clues within the sentences to find the key to the locks.  I read on a Twitter feed that one student said, "To break out of the box we have to think outside the box." I loved that and created this game with that in mind.  I wanted them to have to make inferences and think critically about each clue. The students set forth on the task and the energy level in the classroom was wonderful to watch. The students were engaged, enthusiastic, and collaborating. Cheers went up around the room each time a group figured out one of the locks. One of the parents later told us that her child truly had fun with this activity. When students are so engaged that they go home and tell parents about what happened at school you know you have an activity that truly benefits the students. The fourth grade teachers are eager to learn more about Breakout Education and I am hoping that they can help me spark a school wide interest next year.

Here is the link to the game, "Saving North Carolina" if you are interested in trying it out at your school. http://tinyurl.com/h68b2bc

Posted by LCESMEDIA at 3:37 PM