This year I wanted to do something different for Read Across America Week. I decorated my media center to excite the students, planned Breakouts with 2nd-4th graders, but wanted something different for my 5th graders. I went online to look for ideas and ran across a blog post by Sarah Svarda called Suesstastic Mystery in Library Revealed. After reading it I realized that this was exactly what I needed for my 5th graders. It was engaging, thought provoking and fun. It was time to create the crime scene. 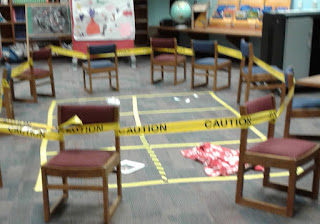 The students were excited and started asking questions as soon as they came in. I had them sit down and explained we had a horrible crime in the media center last night; books ripped, bar codes removed, food left, and scanners moved. We had to solve the crime before we could check out because I couldn't remove evidence from the crime scene.  I divided them into teams and explained that they needed to analyze the crime scene and alibis to get as many clues as possible. We talked about the importance of paying attention to the details and how sometimes it was the smallest details that can help solve a mystery.  They divided into teams and began their investigation. 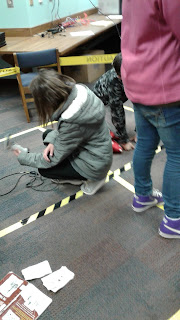 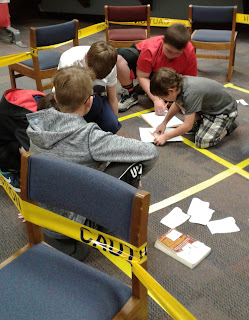 Critical thinking and problem solving were evident at each stage. They were working together and debating their theories while supporting it with evidence from the alibis or crime scene. I threw a lot of red herrings in, as Sarah suggested, to throw them off but they were diligent and kept returning to the alibis given and the crime scene. By the end of the investigation most of them had figured out who was guilty. We discussed the details that led to their decisions and the evidence that suggested it. As the students left the media center I did a quick poll to see how they enjoyed the lesson and they confirmed that they had really enjoyed the Seuss Crime Scene Investigation.  I love to see students so engaged that they don't realize how much problem solving, collaboration, and critical thinking they are truly doing. Today was a great day in the media center.
Posted by LCESMEDIA at 7:27 PM