Every since I started our makerspace in the media center my goal was to give the students the full experience of creating and designing by using a 3D printer. This month that goal became a reality. I decided to pick 5th grade for this project since it would be their last project in elementary media.
They were tasked with creating a product that would be beneficial to other people. They got into groups and started filling out their proposal in Google Docs. They had to explain why they wanted to build the object and then create a sales pitch to convince the judges to pick their project.. Their designs and proposals would be judge by our principal and 5th grade teachers. The winning proposals would be built on the 3D printer. The others would be built using 3D pens.
After they finished their proposals, I introduced them to a program called TinkerCad that allowed them to build in 3D. The students really impressed me with their work especially since we were learning the program together. The collaboration, engagement, and dedication to this project was phenomenal. The students worked through two class periods to finish their products.
Once the students finished the judges had the hard task of deciding which project was going to be built on the 3D printer. The students did so well we couldn't just pick one per class, so we picked three.  The next media day the students entered the media center excited and nervous to find out which design was going to be built on the printer. Mrs. Chandler's class winners included an eyeball, an arm, and a skeleton. The other students had the experience of using our 3D pens to build their projects. The media center was buzzing as the students started building.
I am thrilled that these 5th graders had this experience before they left elementary school.  I can't wait to start our STEAM Fridays next year where we will be creating and designing every Friday in the media.
The following pictures and videos are from today's class. I will post more next week after our last two 5th grade classes get the opportunity to build their projects. 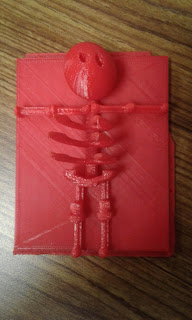 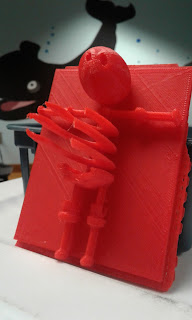 Posted by LCESMEDIA at 8:38 PM